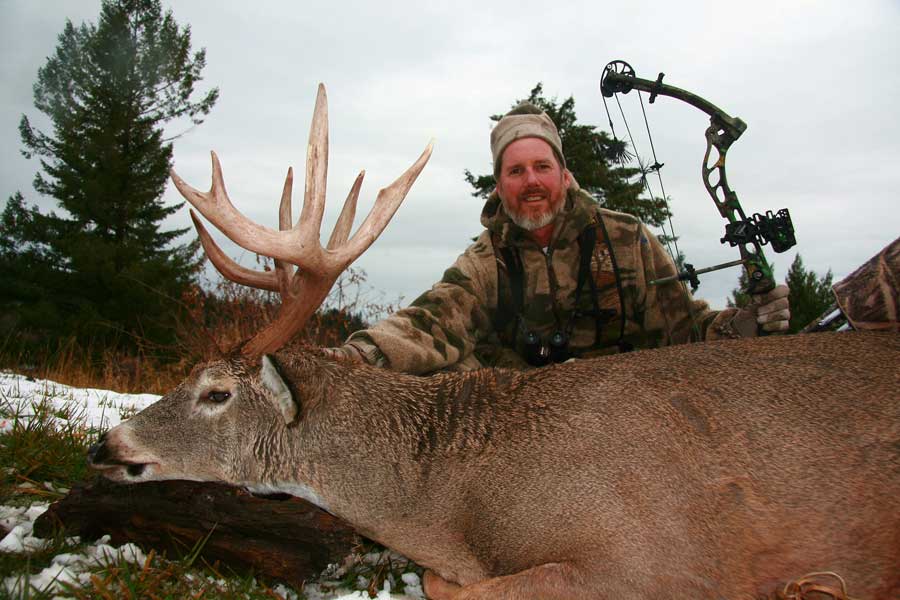 Deer season’s been open in some form or fashion in Washington, Idaho and Montana for some weeks but the best is yet to come. As the first truly chilly days of fall begin to arrive deer, most notably whitetails, begin to feel a stir of hormones prompting the urge to breed. Scrapes begin to grow beneath particular trees (normally the same locations each season), bark peeled from others as bucks vent frustrations and create rubs, but most importantly to the hardcore deer hunter — big bucks appear as if by alchemy. For serious whitetail hunters the November rut marks the best deer hunting has to offer not only in terms of increased movement, but because it’s when normally nocturnal bucks begin to appear during legal shooting hours.

Now it is true that while mature bucks are on the scent of love, it’s also true they don’t toss caution completely to the winds. This is especially true of 3 ½-year-old or older bucks who’ve survived a few seasons. Save blind luck, regularly successful hunters are those who hunt harder and smarter. Winning rut-time strategies include many ploys, from carefully glassing cover edges to still-hunting thick cover to stationary stand or blind hunting.

Spot-and-stalk hunting starts by taking a commanding vantage and putting quality optics to work. In broken terrain found in the Inland Northwest — open clearcuts, canyon breaks or large agricultural fields — this is deadly effective, most especially for long-range rifle enthusiasts. Investing in the best glass you can afford, be that a $340 pair of Vortex Diamondbacks or $1,200 Razors from the same maker, ultimately pays huge dividends. A quality spotting scope from Vortex or Leupold, for instance, can also save a lot of energy, bringing distant deer into instant focus while avoiding the need to hike closer. The better the optics you own, the more country you’ll cover, the more deer you will see. Top-quality optics also assure less eye strain, encouraging you to stay put longer and catch that trophy buck making his move.

For every acre of prime spot-and-stalk habitat the Inland Northwest offers there are likely 10 more inviting careful still-hunting. This normally entails tight cover with limited visibility, places where savvy deer seek safe haven when the pressure’s on. Rifle hunters, in particular, naturally gravitate to open areas and edges where they can put long-range weapons to best use; though it’s the thickest cover deer seek during most legal shooting hours. Most nimrods understand this but ignore the thickest cover because it requires more work to hunt correctly. But still-hunting, especially during damp, wind-tossed November days, can bring patient hunters regular success. Still-hunting effectively is more than moving slowly and silently through sign-littered vegetation. It also involves stopping frequently to soak in your surroundings with every bit of concentration you can muster, seeking that tell-tale twitching ear, stirring legs, the horizontal outline of a deer’s back against vertical trees, or glinting antlers and investigating every suspicion of game with quality binoculars. The seasoned hunter also learns to glean information of approaching deer by listening to warnings provided by scolding squirrels, crows or jays.

Taking a stand — whether climbing into an elevated tree-stand (like a hang-on or ladder model from Big Game Treestands) or into a ground blind (such as those from Big Game or Ameristep) — is an often overlooked avenue for earning deer-hunting success in the Inland Northwest’s thickest woods. Bowhunters have long understood this, but rifle hunters can also benefit from finding a likely ambush and bidding their time. Of course fixed-position hunting requires a bit more attention to detail and scouting than random setup (not to mention warmer clothing). Seeking concentrations of sign is a start (sign such as wet droppings, tracks in snow or freshly-pawed scrapes requiring less guesswork as to when they were made) but the smart hunter also concentrates on funnels or pinch point as bucks begin to travel more widely seeking receptive does. Topography such as saddles, points or hanging benches, or man-made travel-ways such as defunct logging skids, all pose big potential, especially if punctuated by focal points such as scrapes, rub-lines or food. Scrapes (pawed-out areas beneath overhanging branches) and major rub-lines aren’t absolute territorial markers like many believe, but communication centers used by all members of the herd no matter sex or social status. Though the main function of scrapes as directly related to the rut is allowing does to alert area bucks they’re ready to breed. Rubs can be simple aggression-displacement rubs (smaller and rarely revisited), or more important signboard rubs (typically larger and freshened regularly) where scent is deposited to communicate with others in the herd. Scrapes and signboard rubs are most productive immediately following wet weather, as bucks return to freshen scent (a combination of urine, droppings and glandular excretions). An agricultural field of harvested grain, peas or garbanzo beans, alfalfa, or feral fruit trees, can also represent reliable deer magnets as temperatures drop and deer become ravenous.

Timing the rut is one of those subjects — like favorite deer rifles or truck brands — able to spark heated debate among deer hunters. Many hunters will say something to the effect of “You’d better be in the woods on the 15th of November or you’re gonna miss out.” In truth the rut is a process and not so much a set date. The days leading into the rut, or pre-rut, witness increased movement, scrape and rub construction as bucks travel widely seeking the first receptive does. The observant hunter begins to notice the appearance of the first scrapes and rubs of the season, sometimes several weeks prior to actual breeding activities. These are normally started by smaller, subdominant bucks feeling their oats and unable to contain themselves. The biggest bucks are still kicked back waiting for the real festivities to begin. Keep an eye on these scrapes, though, and you’ll eventually notice increased activity signaling that serious movement has begun. These are the days you want to play hooky or squander vacation time. At some point you might notice activity at scrapes suddenly ceases. This normally indicates the rut has hit its peak, bucks camped out of receptive does and moving very little. Give them a few days and movement should spike again, if only temporarily as bucks seek the last does left un-bred.

So, the days leading into the rut peak are normally best for deer sightings, not necessarily a particular day within that time frame. This varies from region to region and various altitudes, largely dependent on when fawns must drop to assure survival. In all, I want to be on stand by the first week of November, spending as much time as possible hunting until Idaho’s late-November wrap-up.

It’s time to gear up now while selections are best, investing in the latest cold- and wet-weather gear to remain dry and toasty, new boots to get you there in comfort or keep feet warm while waiting out that big buck, a fresh pack to carry your gear and get meat out of the field post haste, to assure a supply of needed ammo, or even invest in a new rifle or scope. Moses Lake, Washington, Lewiston and Moscow, Idaho, Tri-State Outfitters or Kalispell and Whitetfish, Montana, Sportsman & Ski Haus locations can help you out here, with expert staff to assure to arrive in the field ready for action.  For the rut is coming and the best is yet to come.