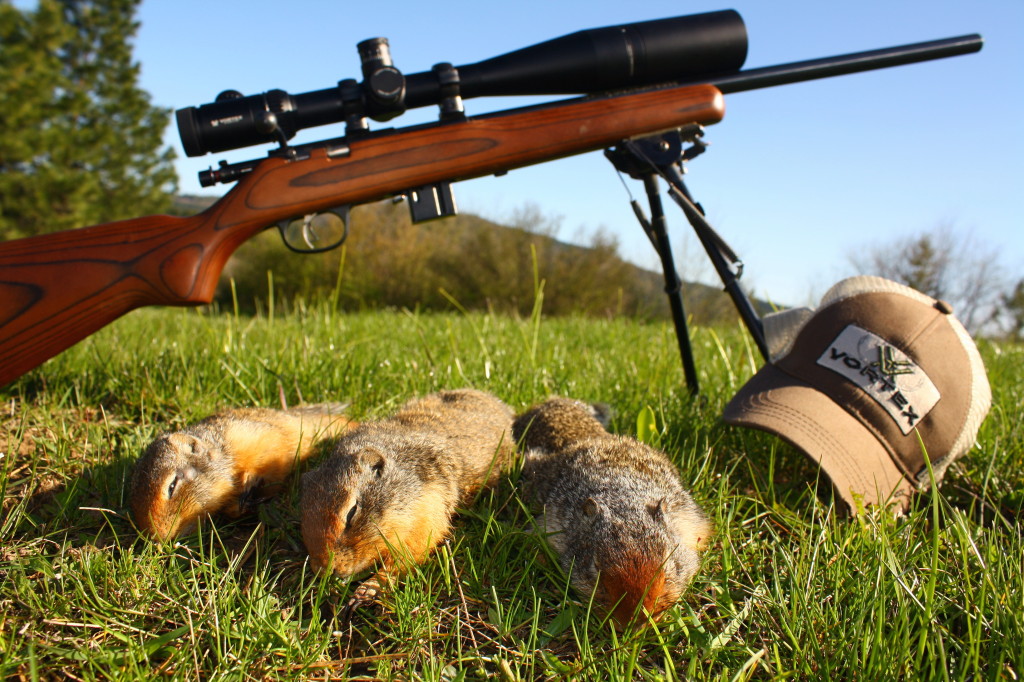 For some hunters late spring means the end of turkey season. For others the beginning of spring bear season. But for many Inland Northwest hunters, and especially accuracy-driven riflemen, May and June spell the peak of ground squirrel season. In reality there really is no “season,” per se, for non-game species such as ground squirrels may be shot year round and without limits (though shooters do need a valid hunting license in Idaho, Washington and Montana, and on Oregon public lands). Yet the fact remains Inland Northwest ground squirrels are most active in the months of May and June. Ground squirrels, you see, are like Goldie Locks – they prefer weather that’s not too cool and not too warm, but just right. “Just right” varies by altitude and region, but normally means somewhere in the neighborhood of 55 to 75 degrees. The very first, of course, will begin to appear in temperatures as low as 50, a few diehards sticking it out in temperature up to 85 degrees F, but you’ll normally see day-long activity when temps hover in the upper-60s. With the approach of summer, warming temperatures and concealing grass ground squirrel shooting slows considerably.

High levels of activity is what you’re looking for in ground squirrel hunting because high-volume shooting is the sport’s largest attraction. Shooting a couple hundred rounds of ammo at a single sitting is par on the average squirrel patch during late-spring months. This is the kind of shooting that will ultimately make you a better big-game shot, as ground squirrels are highly challenging targets — from the larger Columbian (prairie dog sized, normally found in mountain clear-cuts) to tiny Belding’s (hand sized, prairie species). And there’s little guilt involved in shooting these little pests. Shooting enthusiasts are the only ones who could love the ever-hungry, perpetually-burrowing ground squirrel; farmers suffering crop damage, ranchers ruined pastures and potential livestock “traps,” forestry managers undermined roads and nibbled seedlings planted to assure future wood-products production.

The largest majority of ground squirrel hunters pursue them with rimfire rifles. The good-old .22 Long Rifle has likely dispatched more ground squirrels than all other rounds combined. Be that as it may, more powerful rimfires like the 17 Mach 2, 17 HMR, 22 Magnum and newer 17 Winchester Super Mag (WSM) provide more fun via longer reach and, well, let’s just say, wicked DOA impact. Of those, supplies of 17 HMR ammo have remained most readily available (even more so than 22 LR), though the brand-new 17 WSM should become more plentiful as popularity increases.

Many hardcore ground-squirrelers forgo rimfires and adopt centerfire varmint rounds such as the .204 Ruger, extremely-popular and affordable .223 Remington, 22-250 Remington and even the .243 Winchester pushing lighter bullets, just as examples. These shooters are comprised of mostly serious hand-loaders and long-range enthusiasts.

In rimfires, rifle options are almost limitless. Some of the most popular 22 LRs include Marlin’s highly-affordable Model 60 auto-loader, Savage’s Mark II, Model 93 or 93R (with thumbhole stock), Ruger’s venerable 10/22 (basic models on sale this month for less than $200), the newer Ruger American 22 LR (in compact and full-sized), Smith & Wesson’s M&P 15-22, and several gorgeous, wood-stocked CZ models with the look and feel of big-game rifles. Savage and Ruger are the biggest sellers in 17s, models like the Savage model 93 synthetic or Ruger American (compact and full sized) leading the way in accurate, budget-priced models, Savage’s 93R (with or without thumbhole stock) with laminated-wood stocks not only beauties to behold, but ultra- accurate.

In centerfires Lewiston Tri-State Outfitter’s gun guru Travis Marler recommends the Ruger American or Savage Axis, as examples, in .17 Hornet, .204 Ruger, .223 Remington, 22-250 Remington or 220 Swift as a perfect combination of affordability and ready accuracy. For those who really want to push the outer limits of long-range challenge Marler recommends Mossberg’s MVP Varmint Rifle, Ruger Hawkeye Predator, Savage Model 10 or 12 LRP or LRPV, or Remington’s Model 700 with 5R Tactical Rifling or 700 VTR, as examples,

Of course picking off a small target like a ground squirrel from any distance requires a gin-clear, ultra-precise scope. Look to Tri-State Outfitters and Sportsman’s Ski Haus for a full assortment of BSA, Nikon, Leupold and Vortex scopes, among others. Stand-outs include the BSA Sweet 17 (calibrated and turreted specifically for the popular 17 HMR), Nikon Prostaff 22LR (22 LR calibrated) for rimfire rifles. In centerfires Nikon’s M-223 and P-223 (5.56mm/223 Remington specific), or more serious glass like the Leupold VX-3 and Vortex Viper 6.5-20×44 (or x50) and Viper PST 6-24X50, all with click-stop elevation and windage turrets, accommodate the most serious precision or long-range shooter.

Finally, for the serious or semi-serious ground squirrel shooter Marler says you’re just not in the game without a quality pair of binoculars (for spotting targets initially) and accurate laser rangefinder (to get precise range on these tiny targets). Tri-State Outfitters and Sportsman’s Ski Haus also carries a full line of optics from Vortex, Nikon, Leupold and others.

So get into the action this spring by visiting one of our six locations of Tri-State Outfitters or Sportsman & Ski Haus in Montana, Idaho or Washington and letting us fill all your ammo, firearms, optics and reloading needs.