Part I in our Winter Sport Series

When I lived in the Southwest I loved winter (namely its bird hunting) and hated summer (more pointedly, its consistent triple-digit temperatures).  After a decade in the Inland Northwest those sentiments have essentially reversed, at least in terms of true winter, which for me is January and February.  Admittedly this has a lot to do with a three-mile-long driveway that must be plowed after frequent winter snows, and the ice-slick hour commute into work that follows on such days.  Such is the price of living in forested, game-rich mountains situated well above town…  Today the best things in life occur June through August (dry-fly fishing for trout), September (archery elk season) and October (fly fishing for steelhead).  These are the very reasons I left territory I’d spent an entire life becoming intimately familiar with to come north and start a new life.

But I digress.  So true winter – aside from plowing snow in the dark of morning, the daily anxiety of sliding into an icy ditch and banging up a vehicle, 7:30 a.m. sunrises, 4 p.m. sunsets, occasional frozen water pipes and muddy dog tracks through the house – isn’t something I truly hate, hate.  I mean not in the sense of, say, the federal government’s intrusion into my private life.  But unlike summer, when every day away from work offers a cornucopia of outdoor possibilities, I sometimes feel a bit hemmed in by winter, its sometimes oppressive weather and too-short days.

But let’s not dwell on negatives.  S.A.D. (seasonal affective disorder) well aside, it’s difficult enough to get motivated for outdoor activities when the mercury plummets.  But there are things, fun things, to get you out from behind the boob tube and share quality time with loved ones, or simply engage in some healthy outdoor activity. 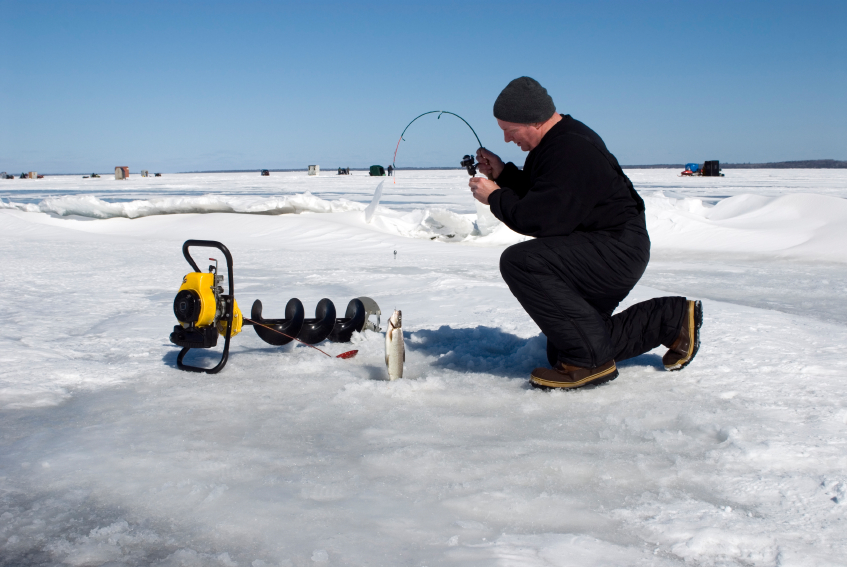 I’ve learned to embrace ice fishing, my motto being ice fishing is better than no fishing at all.  Besides, bluegill, crappie, trout, bass or pike caught from clean, nearly-freezing water are the best fillets you’ll ever taste.  There’s also something truly adventurous in braving the elements out on the ice and returning home rosy-cheeked and toe-tingly to enjoy nutritious food you’ve wrestled from a frozen land.

Of course you can use the standard-issue tackle of summer (and a digging bar to spud holes through ice), but ice fishing is really a lot more fun – and productive – while using the proper tools for the job.  Instead of a digging bar (which can easily end up on the bottom of the lake after slipping through ice-slick gloves) a hand auger is preferred, creating fishing ports much more efficiently and cleanly.  It’s $55 well spent.

Stubby but sensitive ice-fishing rods or tip-ups (allowing you to operate through several holes simultaneously) are another welcomed piece of gear, making it easier to maneuver fish through small holes and detect the most subtle nibbles (which is par while ice fishing).  Special-formula ice-fishing lines (Trilene Micro Ice or Cold Weather, for instance) also remain suppler in cold temperatures and is extra sensitive for those easy-to-miss panfish taps.  An inexpensive rod holder poses the works above your hole (allowing you to sit comfortably in your folding chair with hands in warm pockets).

The most serious sports invest in an ice shelter, to cut wind and hold the heat from something like a portable Mr. Heater.  There are also extraneous gear to consider, like ice cleats to strap on your winter boots to assure a sure grip on slippery ice, bait buckets or tubs and ice skimmers.  At some point you’ll need an ice-fishing sled to schlep all this gear (and hopefully some dead fish) to and from your vehicle.  This is all gear you’ll find at our employee-owned Tri-State Outfitters and Sportsman & Ski Haus locations.

In light of freezing line and iced guides, as a hard-core fly fisherman I sometimes neglect winter steelhead fishing.  Many anglers are of the same mind, considering steelhead fishing a mild-weather pursuit reserved for September and October.  Of course steelhead are in Idaho’s Salmon, Snake and Clearwater systems throughout the winter and into early spring and fishing remains good throughout.  You just need to be tough enough, to want it enough, to bundle up and fight Mother Nature for that bounty.

Various studies I’ve read reveal steelhead are individualists, some camping out in lower stretches until the last possible moment before moving to spawning waters, some moving around frequently, others making the entire trip up front before hanging up.  What this means is steelhead are distributed throughout Idaho’s river systems any time from early August through May.  Your favorite October pool can still produce in February, even it’s on the outskirts of Lewiston on the lower Clearwater River.  Though, most serious steelheaders follow migrations upstream, fishing farther up the Snake and into the Grand Rhonde or past Orofino and into the Middle and South Forks of the Clearwater system as the season progresses.

Steelhead are spring spawners, while salmon have been in the system since August.  Area rivers during this season are essentially full of eggs.  This makes beads (on spinning or fly-fishing gear) deadly effective.  This consists of threading a bead (like Blood Dot Eggs) through the terminal line end, securing a size 6 or 4 red octopus hook, and anchoring the bead about an 1 ½ above the hook by wedging it with a toothpick.  A steelhead takes the bead thinking its eating an egg, hook sets planting the hook on the outside of the jaw where it not only holds better but inflicts less damage on the fish.  This is sent down with a split shot or sliding weight and suspended beneath a slip bobber (spinning gear) or strike indicator (fly fishing).  Aero Jig, Over The Edge Roe-Bots or Beau Mac’s SMJ-Pro jigs (spinning), egg patterns and articulated flies (fly fishing) are also effective during late seasons, providing delicious fodder for the smoker.

All Tri-State Outfitters and Sportsman & Ski Haus locations offer ample supplies of steelhead-related gear, but you’ll have to travel to the Lewiston, Idaho area to find these most noble of all fishes.

Join us next time when we’ll talk about other fun area activities to help pass the winter months.