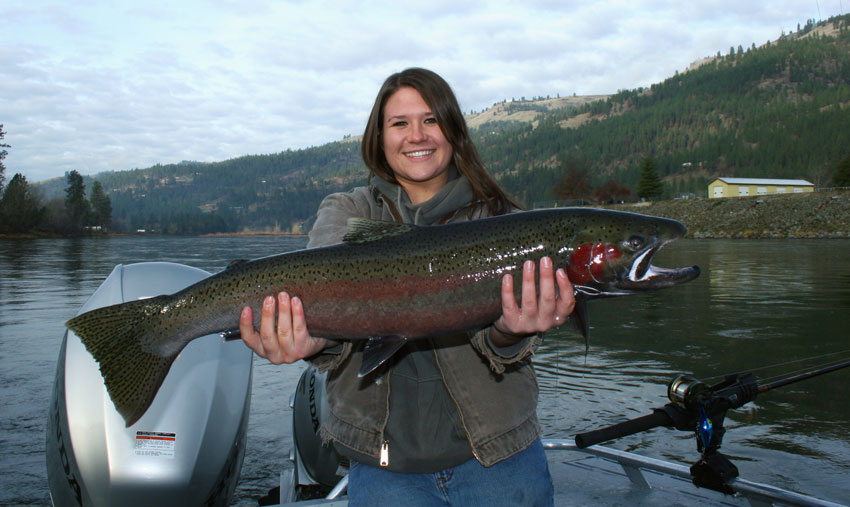 To any thinking angler anadromous, or sea-run, fish hold a special fascination not only because they are bigger than average, and exceptional table fare bringing to us the rich nutrients of the sea, but because of their intrinsic mystique. I mean really, here’s a fish who’s spawned, hatched and raised in your own backyard and against great odds travels hundreds of miles downstream through a gauntlet of terns, pike minnows, cormorants and other hungry predators to find the sea, wanders the ocean’s vast wilderness for several years dodging Asian driftnets, then as it heads home hungry sea lions, seals, sharks, native gillnets and dams to make the arduous upstream journey to the very rivers and streams from which it originated. The entire thing boggles the mind. Or at least it should, even when those fish originated from hatcheries. At best one in 100 survive to see their natal streams (or hatchery gates) once more. Think about this for just a moment the next time you hold a fall steelhead or Chinook salmon.

With the cooling days of fall steelhead (the first having arrived in late July) and Chinook salmon are arriving in the greater Columbia River system in good numbers, with more to come. Most notably this includes the Inland Northwest’s Clearwater River forks and Snake, Salmon and Upper Columbia systems. For those lucky enough to live in the Lewis/Clark Valley, this means fishing expeditions before and after work and weekends, but surrounding-area anglers have also began to arrive to take advantage of the excitement and bounty this region has been providing native residents for millennia.

Just as there is more than one way to skin a cat, there are many ways to catch steelhead or salmon. From fly fishing to hardware to trolling to bait, every angler seems to have their favorite ploy. For those of you new to the sport, here are some starting ideas.

In fly fishing your main target is steelhead, as Chinook just aren’t inclined to take the fly (though I’ve caught the occasional). There’s a general notion afoot steelhead on fly involves some secret combination of skills known only to experts. It’s true that due to the very nature of the beast (steelhead returned to fresh waters aren’t actively feeding after all) there can be a lot more fishing than catching, but techniques are fairly straight forward. The basic approach for early-season, A-run steelies (July through October) is swinging classic steelhead flies on a 7- to 9-weight single-hand or longer spey rod.

This involves throwing something like a #6 or #4 Green-Butt Skunk, Purple Peril or Fall Favorite, just as examples, over likely-looking holding water at a slightly downstream angle, mending to assure straight-line contact with your fly in the event of a strike, and swinging the fly over the hole. This is normally accomplished with a floating line, though a sink tip or full-sinking line isn’t taboo in deeper runs. Others position themselves at the tops of riffles shelving into deeper water and feed line downstream, stripping against current to entice fish holding in these oxygen-rich holes.

Later, as waters cool and larger B-run steelhead arrive (late October), swinging larger (sometimes weighted) #2 to #1/0 patterns still does the trick, but many fish also begin to congregate in deeper, slower waters. Diehard anglers willing to brave the elements for these sea-run rainbows sometimes pushing 20 pounds take to dead-drifting egg patterns and split shot beneath strike indicators – much like classic nymphing for trout. Patterns vary from various-shade poly-yarn glow-bug “flies” to realistic plastic beads wedged an inch above a bare #4 or #2 red octopus hook with a piece of toothpick.

It’s safe to say slip-bobber fishing is most popular with regional anglers, most especially bank fishermen, though it produces just as well from boats. The technique is equally productive for steelhead or salmon, though you’ll have to make a decision about which you wish to target and choose terminal tackle accordingly. Steelhead normally indicate 12 to 14 pound test line, salmon up to 30 pounds.

The basic setup includes first feeding your main line through a commercially-prepared stop knot, securing it to the line and trimming tags (instructions are included with packaging). You then feed the line a stop bead, then the slip bobber. Below this is secured a slip sinker and swivel, or swivel-equipped weight. A 1 ½- to 2-foot leader is tied below this, and to its end a jig (3/8-ounce bucktail for salmon like one from Mack’s; 1/8- to ¼-ounce marabou for steelies from Aerojig or Beau Mac, as examples). To make the jig more enticing – and scent appealing – a shrimp tail (natural or pink), bottled coon shrimp (red, orange, purple or pink) or salmon-egg sack is added.

The stop knot is slid up and down the line to adjust how deeply the jig rides, according to water depth, the stop bead/slip bobber stopping at the knot with the works hanging below. You normally want the jig/bait to ride six inches to a foot above bottom, putting it in the fish’s face while also avoiding snags. The works is cast into the head of likely-looking water and allowed to drift downstream, feeding line as it passes your position to prolong drifts (the longer it’s in the water, the more likely you are to attract attention). When the bobber goes down, moves against the current or bobbles unnaturally, reel in slack and haul back on the rod to set the hook. Just take care to keep all slack mended out of the line during each drift to make positive hookups more certain.

One of the easiest — and deadliest — methods for landing steelhead (and the occasional salmon) is back-trolling deep-running plugs. This requires a boat. The basic technique is to pull your boat into a likely run, equipping rods with deep-running plugs such as Luhr Jensen’s Hot Lips (depth capabilities provided on labels) and K11X Kwikfish or Brad’s STD Diver or Wigglers. We normally issue about 80 to 85 feet of line from a stout level-wind system before setting the drag and placing rods in holders. Now the tricky part (for the uninitiated): The key to success is holding the boat steady in the current with a smaller trolling motor (8 to 10 hp outboard) so that it’s losing about, say, a foot of ground per minute. You’re essentially backing plugs into a fish’s face, provoking territorial/annoyance responses.

Now, if you ask a dozen steelhead fishermen which color plug’s best you’ll likely get a dozen different answers, each insisting you’ll never catch a single fish with any other option. Understand they’re all fishing exactly the same waters. Like flies, you must believe in what you’re offering, stick with something, or you’ll find yourself changing plugs like a schizophrenic operating a TV remote when action’s slow. One thing’s certain; you won’t catch fish without plugs in the water…In Hot Lips I’ve had great days on orange and silver/blue, while Tri-State customers tell me sparkle-black and purple are the only way to go. Brad’s, well, there’s just too many colors to contemplate…Neon greens and reds, solid black and “hunter” orange seem to sell most briskly.

Back trolling also adds the option of night fishing to the mix. Brad’s Lighted Wiggler plugs include electronic elements, contact made through each hook when the circuit’s closed via conductive water, lighting a small red or green LED in the plug butt. The effect apparently drives steelhead crazy, resulting in fast action on certain nights.

Things really get interesting when trolling for Chinook salmon. They’re not quite as aggressive as steelhead, tend to hold in deeper, slower waters, and can only be provoked by getting something appealing right in their faces. This normally involves a seemingly excessive array of hardware.

It all starts with a three-way swivel or weight slider tied directly to the rod line. A heavy 1- to 3-ounce ball weight (depending on depth and current speed) is attached to a drop leader (normally slightly lighter than the main line so it can break away in case of snags without losing the works). This can be eliminated if you own a downrigger. Behind this is added more leader and a flasher, such as Les Davis’ Herring Dodger, Pro-Troll HotChip Flasher or HotSpot Agitator.  Still more leader is added behind the flasher and a lure or bait added. A Luhr Jensen K15 Kwikfish with herring filet lashed to its belly with Miracle Thread, Brad’s Super Bait with oily canned tuna packed inside, Brad’s Magnum Wiggler with shrimp tail added to a belly hook, or cut-and-rigged whole herring (often treated in something like Fire Brine to add scent and color) are the most popular offerings. Chartreuse/neon yellow, neon green or purple-theme plugs seem most productive for salmon. The entire apparatus is carefully fed behind an anchored boat (to avoid tangles) until it touches down and left to sit in hopes of intercepting salmon traveling upstream.

Finally, another technique favored by bank fishermen (though just as viable when operating from a boat) is plunking. The label indicates the sound made by the large ball weight used to cast bait well away from shore, take it to the bottom and anchor it there after hitting water while casting. Basic set-up (again everyone has their preferred combinations) includes a three-way swivel or weight slider with 8 inches to a foot of leader to hold a ½- to 2-ounce ball weight and another length of leader holding a shrimp or egg sack. Some combination of “Cheaters/Pills” and/or Spin-N-Glos is normally added above the hook/bait for further attraction. This is really no different from catfish fishing with a glob of worms or dough bait – lob the works out, let it set, reel in slack and prop it on a forked stick while you wait patiently and sip a beverage.

Which technique you choose most often hinges on available equipment and time (boat verses bank fishing), temperament (KISS or Gear Head) and which waters are being addressed. No matter. Tri-State Outfitters in Moses Lake, Washington, Moscow and Lewiston, Idaho, are close to the action and have you covered, whether dropping in after work to gear up for the weekend, or traveling from outlying areas for a long-awaited vacation. We also have a highly-experienced, hardcore-angling staff ready to help you choose the right equipment for your preferences, and offer seasoned advice on rigging up, current hotspots and what’s working right now. We also have everything you’ll need to smoke those fish after a productive day on the water. Get in on the action this season, because sea-run fish are big and fun, and just happen to taste real fine.