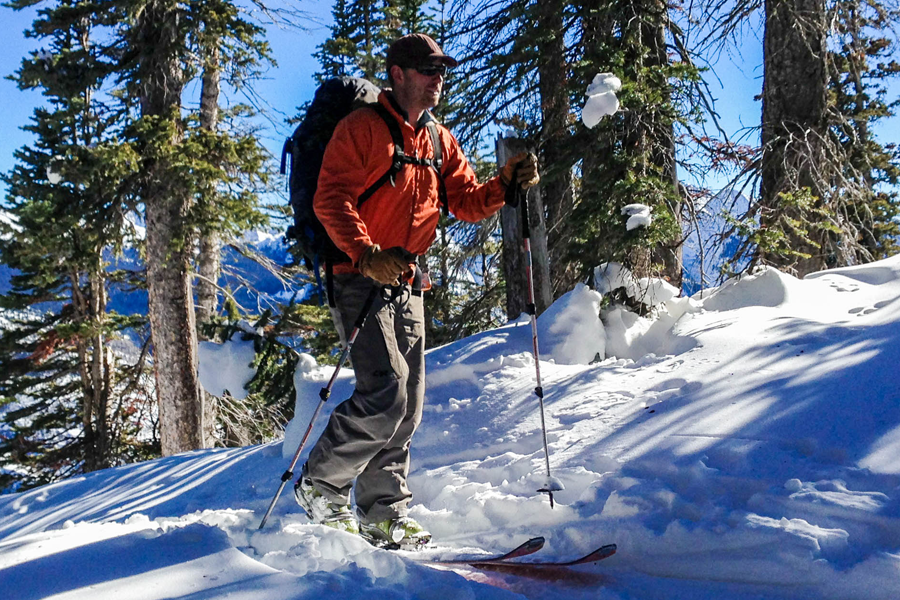 I am not a runner.  I’m familiar with the sport…and I know people who run.  In fact, I’ve attempted to adopt a running routine a few times in my life.  But it was those few earnest attempts that helped me solidify my commitment to the idea – I am not a runner.

I’ve been a downhill skier for most of my life, and I can honestly say I have never spent a moment regretting any of my experiences on the slopes.  But here’s the thing – you’re on a slope.  You could essentially just “stand there” on your skis and you’ll slide down a hill.  Cross-country skiing is done on a more flat surface, so in order to move forward YOU have to make that happen.  If you encounter the rise and fall of rolling terrain – you can slide down one side, but you still have to get yourself up the other, and just thinking about that part was exhausting.

Much like downhill skis, cross-country ski equipment includes two skis, each with its own binding, a pair of sport-specific boots and a pair of poles.  The skis are somewhat longer than one might wear for downhill, they have a narrower profile and the bottoms are “scaled”, textured one direction, so you can slide forward (ski) when possible, but you won’t slide backward.  The scales provide traction so you can propel yourself when necessary.  Cross-country skis are also very lightweight so they’re barely noticeable, provided you’re moving forward.  It’s those moments when you’re not moving forward, and you feel compelled to turn to the right or left, that they become VERY noticeable.

The bindings are not at all like downhill bindings.  Instead of the sole of the boot being firmly, flatly clamped to the ski, effectively making the ski a static extension of the sole; the cross-country binding is hinged and connects only to the toe of the boot allowing the heel of the boot to raise and lower, much resembling the motion of how you might walk or run.  Working in concert with one’s poles, the idea is to push forward with one ski while sliding forward on the other; the hinged binding allows the “push” foot to raise and bend naturally and comfortably.

We all met at my home on a crisp Saturday morning.  Being a country-dweller, it seemed like the obvious choice to me, we would just step out the front door, throw on our skis and away we’d go!  I went inside to put on the borrowed boots then stepped back out and right into the borrowed skis.  Cross-country ski boots are absolutely nothing like downhill boots.  By comparison they’re exceptionally comfortable and in no way impede ankle movement.  They slip on simply and quickly, like a pair of funny-looking hiking boots, and they lock into the bindings on the skis just as quickly and easily.  Before we knew it the four of us were off on what would be for me a life-changing adventure.

Now, to be clear, I am not averse to exercise.  I think quite simply I just didn’t care for running.  It’s not just the motion and the elevated heart rate!  There’s the pounding of feet on the hard surface in what might not be the best footwear for the experience.  There’s the ridiculously early hour of the day you have to go out and do it to avoid being seen by people who actually do it because they like it (they usually like to do it later in the day).  Within moments of taking off from my front yard I had found the rhythm.  It’s that thing you achieve when your skis and your legs and your poles and your arms all suddenly start working together in a beautifully synchronized dance.  You’re kicking and reaching, blissfully unaware of your increased respiration or your elevated heart rate.  You’re completely involved in the sound of the wonderful quiet that wraps itself all around the sound of your skis as they glide across the snow.  It’s that same amazing peace that sweeps over you when riding a chairlift on a crisp, calm, sunny day in January; flying quietly through the air surrounded by Nature’s glory.

For me – there’s nothing like it.  Nothing.  Well, maybe inline skating.  But, only kind of.  Skating requires asphalt.  For cross-country skiing, anything that resembles a snowy trail will do.  Country roads, logging roads, linear parks, even golf courses can make great places to ski.  Just remember to carry a backpack, stay hydrated and layer your apparel.  And always, always be respectful of nature.