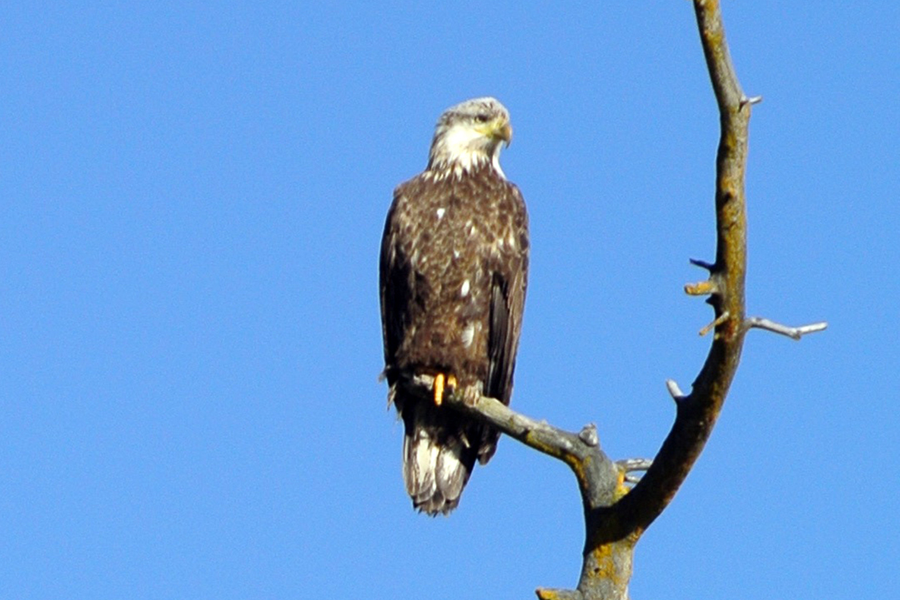 These beautiful, majestic birds with a wingspan from 6 1/2 to 7 1/2 feet are the picture of strength and freedom. No wonder they were chosen to become our National emblem back in 1782. However in the mid-20th century their very existence was threatened by human activity including hunting, use of the pesticide DDT, loss of habitat, power line electrocutions and other factors. In 1963, there were only about 400 breeding pairs left in the wild. Thanks to protections put in place, bald eagle populations have made a comeback with an estimated 9,800 breeding pairs today.

Eagles that travel from their nesting ranges further north to winter at Lake Coeur d’Alene feast primarily on spawning kokanee salmon. Early morning is the best time to see them feeding as they splash down and snatch their meal. After feeding, the rest of their day is spent mainly perching in taller open trees and snags, descending occasionally for a tasty salmon snack. On windy days especially, you can see them soaring effortlessly on the wind currents. Capable of reaching altitudes of 10,000 feet they can soar continuously for hours at a time.

Some of the eagles you are likely to see may not sport the iconic white head of the adult bald eagle. They go from mostly brown through several phases before attaining their distinct adult plumage around their fifth year. Both male and female adults have the white head on reaching adulthood. Females are bigger than the males.

The eagles are sensitive to disturbance by humans. With that in mind, visitors are asked to always keep their distance, ideally viewing the eagles from the BLM boat ramp or the Mineral Ridge Trail Head. By all means, bring your spotting scope or binoculars to ‘get up close’ to these winter visitors who provide such a spectacular wild spectacle to those of us lucky enough to be able to view these magnificent creatures.

For more information on bald eagles and the Lake Coeur d’Alene Eagle Watch, you can visit:
https://www.blm.gov/programs/fish-and-wildlife/wildlife/about/idaho/lake-coeurdalene-eagle-watch